Life is funny and unexpected. Here I am, a girl from the most obese country in Asia according to BBC (though I’m wondering if that’s still true), suddenly finding myself living in Grenoble, one of the sportiest cities in France mostly due to its location nestled at the foot of the French Alps. I’ve also come a long way from being a girl who marked the first day she’s seen snowfall (nighttime, 31st of March 2010, Tokyo, shit show that melts right when it hits the ground) to a girl who went skiing 3 out of 4 weekends in the past month.

I admit I’m kind of showing off >:), and why not, we are literally surrounded by mountains and ski stations here! And there aren’t many other sporty choices in winter here for me to burn off the shockingly vast amount of  brioches I am consuming on a daily basis. Plus I was lucky enough to get a pair of second-hand skis and batons for €10 so it’s slightly easier on my skinny student wallet. Eh, pourquoi pas? (French for why not?)

Here is the website we used to book tickets from Grenoble to these stations. By the way, one thing that’s different about skiing here from skiing in Japan is that you can’t rent ski clothes and goggles. You can get a whole set of ski clothes from one of those big sports shops like Decathlon for an average of about €80 / set.

Yes, we aren’t just close to mountain ranges with ski stations, we are also close to the home of the monks who make one of the most famous liqueurs of France. We bought a small bottle last week to celebrate le bf’s birthday. It’s sweet and herby and great in small sips to aid digestion after a large meal. 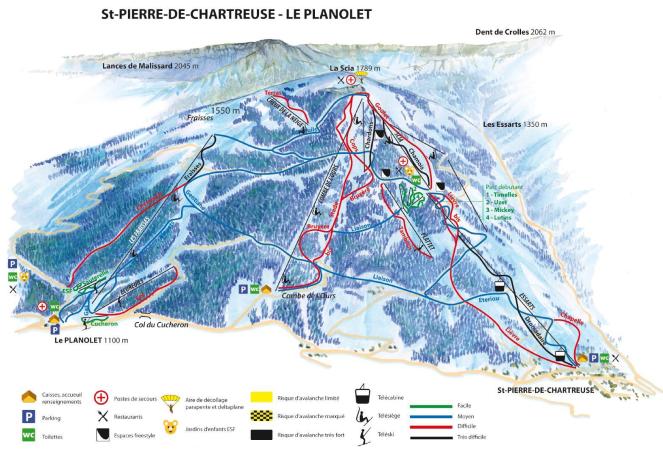 As you can see, it’s a relatively small ski station and the highest altitude is only 1789m. Moreover, the day we went was one of those random spring days that got lost in winter, i.e., super hot and sunny that most of the snow on the ground turned to soup. But, this is a nice station for a beginner intermediate like me in my second year of skiing. I tried that nice long blue piste in the middle couple of times and did some red, got exhausted, and took a break with a hot chocolate while le bf and la mum go off to, probably, the black pistes. I want to be as active as the old people here in the future.

We are in the chartreuse so my best guess would be that the mountains in the distance are the Vercors because they are less jagged and beautiful. We bought pizza beforehand and had lunch at a corner of a green piste and the people sliding by wished us “Bon appetit”. I honestly thought at first they were mocking us and indirectly telling us to get out of the way but I found out later that it was just a polite thing to say to someone who’s eating. Even if you don’t know the person. And the proper way to reply is to thank them with a “Merci!”

This is the view of Grenoble on the way down. I am so excited about all the hiking I can do when summer comes!!

Transport: We went by car, so I don’t know how much the bus costs but it took about 40-50 minutes from Meylan.
Station Day Pass: $17.50 (student price)
My completely subjective rating: ★★★

This time we went to the Belledonne, or Belladonna as they call it in Italy on the other side of the mountains. It’s higher than St. Pierre, and as you can see on the map there are three starting points. We started at Prapoutel Patte d’Oie (literally, goose feet) and started the day by trying to teach my friend Kitty who’s a complete beginner at skiing. Two words, BAD IDEA. I can conclude now that E and I are the worst ski teachers ever. Because I’m not confident enough to teach and I don’t have the strength to help out a friend if she slides off into the distance and E has been skiing for too long now that he’s forgotten what skiing for the first time feels like. Plus we were both impatient to start skiing ourselves. After some embarrassing falls and almost seeing Kitty slide off a cliff we decided to give up and return to ground zero on the chairlift to pass her on to a real certified instructor at Ecole du Ski Francais. 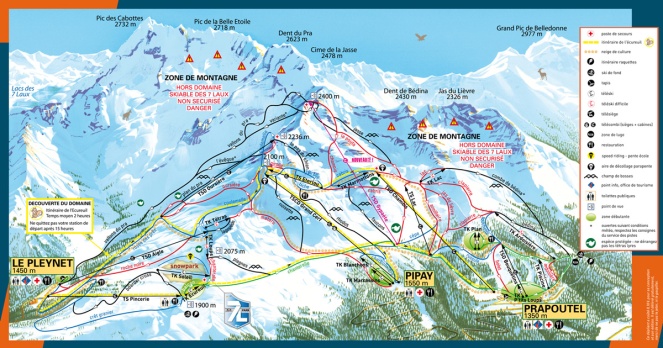 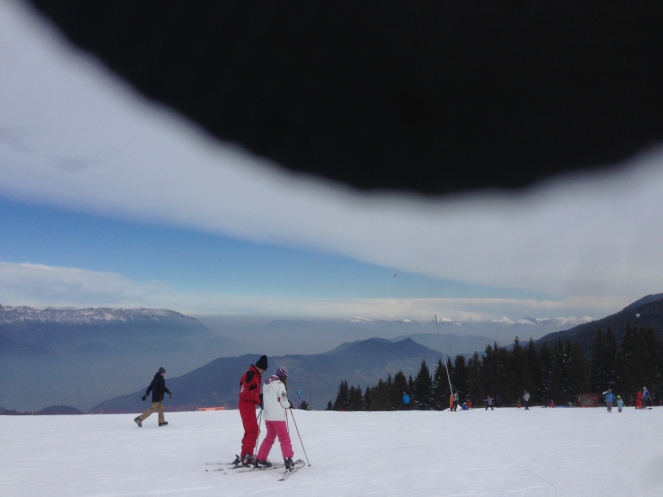 Here’s a view at the top of the TSD Bouquetins chairlift station shown on the the lower right side of the map. We had our sandwiches here. Look there was a strip of light blue sky on that day.

Working my non-ski jacket, secondhand ski pants, and secondhand batons. I think this was at 2100m. Across us is the Vercors, so we are facing west in this picture and Grenoble would be between these two mountain ranges. 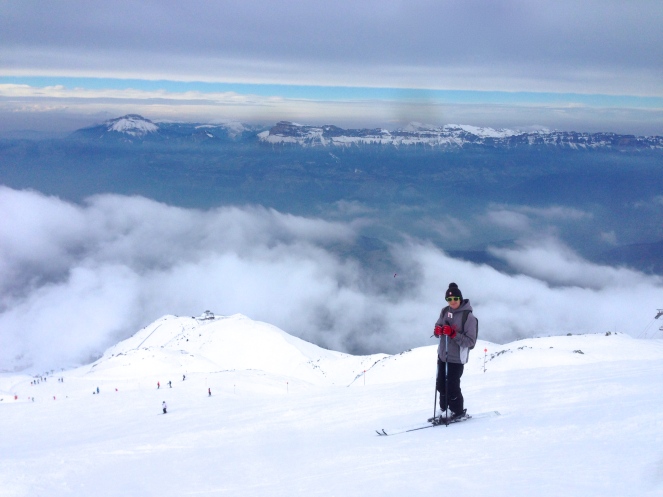 And I think this was taken on one of the reds coming down from 2400m, the highest altitude.

We ended up at Le Pleynet (the ski station on the left side of the map) and had a customary chocolat chaud and coffee. Then we took the nice long green piste back to Prapoutel to meet Kitty. Warning, this green is easy in terms of slope steepness but because the piste is narrow and the right side just drops off into a cliff, you gotta watch out if you’re afraid of heights.

Transport: 40 minutes from Meylan Plaine Fleurie
Station Day Pass: $32 including transportation
Ski shoes rental: €7
Tarif for 1 hour of 1-to-2 or 1-to-1 ski class with an ESF instructor: €43 before 2:30pm and €46 for after
My completely subjective rating: ★★★★★

Ok, I did not know the pistes looked like this because we were skiing for the whole day without a frigging map. The weather was freezing on that day with a total of 15 minutes of sun and occasional light snow. We spent most of our day at the lower part of the station (La Blache on the left side of the map) because I was dying of cold and complaining a lot lol oops. L’Alpe du Grand Serre is located in the Oisans, which is the mountain range directly south of the Belledonne.

We ran into a group of soldiers on their training on one of the green pistes. They’re carrying some white things that look like snow on their backs. They look kinda cute but eerie at the same time because they’re so orderly and synchronised. By the way, since the ISIS, we also occasionally see a group of soldiers surveil the city centre completely armed with machine guns  and grave expressions. They kind of freak me out but they’re surprisingly short for soldiers.

One thing I can comment on the pistes at this station is that the difficulty levels of the pistes feel higher than their categories. This is generally in terms of steepness though, as you can see from the photo above that the pistes are wide and there is plenty of space to   turn without feeling self conscious about the pros behind you.

After falling many, many times because the snow was too powdery (I still can’t navigate well on poofy snow) and visibility was shit, I basically retired at about 2:30pm in the afternoon and set up camp at one of the restaurants at the bottom of the station while E went off on his own, probably thinking “Finally, good riddance!!” in his heart. But then the snow got heavier and he came to join me at the cafe 20 minutes later lol.

There was also a big white snowy dog who looks like he’s a regular at the station. He was chasing after one of the ESF instructors, wagging its tail cutely but when I approached him he didn’t seem as interested.

I’m gonna end this with a rather nice picture I managed to take in the short 15 minutes of sun we had. This was probably at around 2000m and we had lunch at the small hut restaurant called La Flambee seen below us in the pic on the left.

Too bad the season is almost over now. Merci l’hiver! Look forward to a post on spring-y activities next!

One thought on “#11 Skiing in Grenoble”