This is going to be a very pretty post.

I went hiking at Chartreuse again yesterday and on the way down I really just couldn’t resist collecting some flowers because they were everywhere! In total I think I collected about 20-25 types of different flowers; those growing on the ground, on trees, on bushes, you name it.

I’m starting to understand now why a number of the biggest artists originated from France or decided to move here to pursue painting. It’s the countryside, the nature, the flowers, the stone buildings, the ivy. When I was young, I had a puzzle in the picture of a country house painting that looked something like the picture below. I think sceneries like that had been subconsciously imprinted onto my brain as a romantic dreamlike place, a place from a fairy tale, and I wouldn’t have believed you that these places existed or even if it did, they were in  fairy tales. 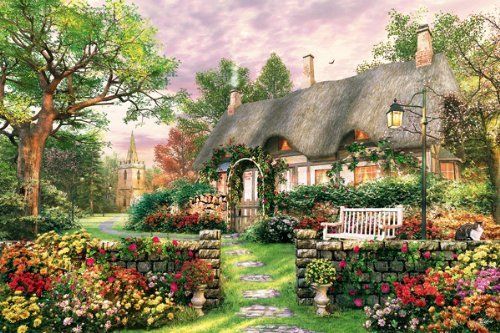 But THEY DO. In France and maybe in other parts of Europe I have yet to visit. On my first hiking trip to Chartreuse I remember telling E, “Wow I’m living in the region of the world that inspired the people who have created all the things I believe to be pretty. Gosh, I’m dating someone from a postcard world,” which to he replied, “Well, you’re like a character in the postcard for me, too.” #<3

So here’s my stash↓ I have no proper vase so I’ve used a cleaned jam jar and a plastic cup. The class.

And because I like documenting and listing things, I’m going to introduce the flowers. Actually a lot of them fell apart when I tried to do the photoshoot (lol, listen to me) so I only managed to photograph some of them, sadly. 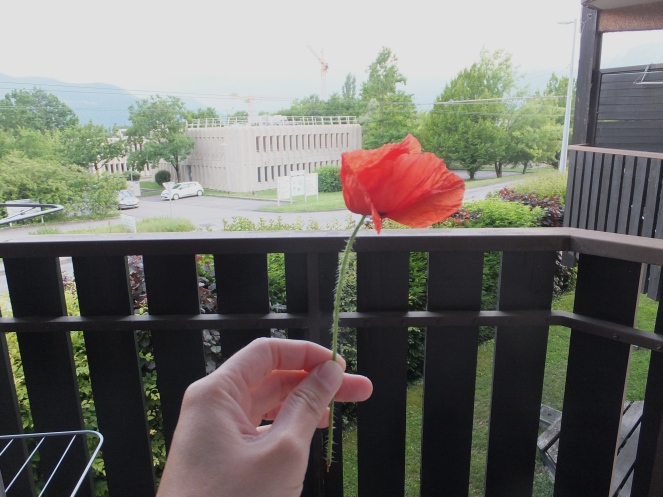 Yesss the iconic flower by the perfume maker! These flowers were sooooo fragile it’s a miracle the four petals didn’t drop off by the time I reached home. Scentless, ephemeral, but so simple and pretty. Sometimes when I’m in the bus going to town I see some by the roadside I’m like “dammnnn I wish I could go pluck them without looking like a fool standing by the highway.” Also I think it’s illegal to walk on the highway anyway lol.

This photo turned out so well I was surprised myself. Doesn’t it look like a realist painting?? The best part is the unintentional (trust me) yellow petal of the Golden Button, or in French, “Bouton d’Or”. There are two white flowers in this picture; the lower one is a common daisy, they are EVERYWHERE by the road; and the higher one is the flower of the red fruits you see on the right, the “strawberries of the woods”, or “Fraises de Bois”. These are strawberries a lot smaller than the normal ones and they grow on the ground. Because they’re so small it’s not profitable to cultivate / sell them and they generally grow in the wild. E used to eat them all the time as a kid. I felt like Hansel and Gretel when I was gobbling as many wild strawberries as I could. 食べ放題だよ。 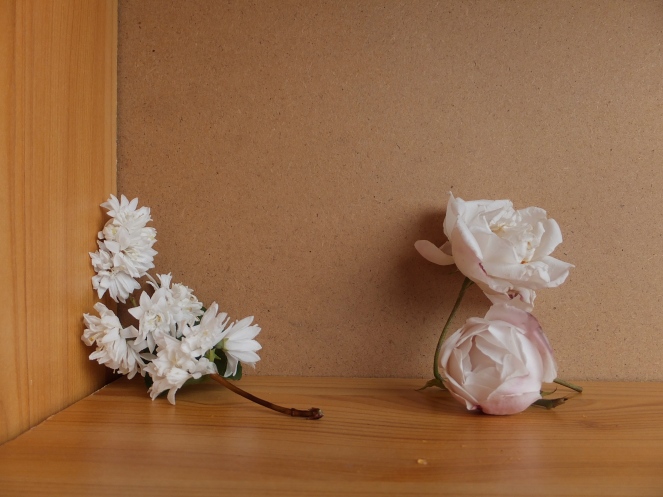 Yeah.. they couldn’t stand nicely in my jam jar so I had to lay them down like that. Haha. These white, mildly scented flowers grow on trees whereas the roses on the right were almost scentless and extremely fragile.

④ Moving onto the yellow flowers 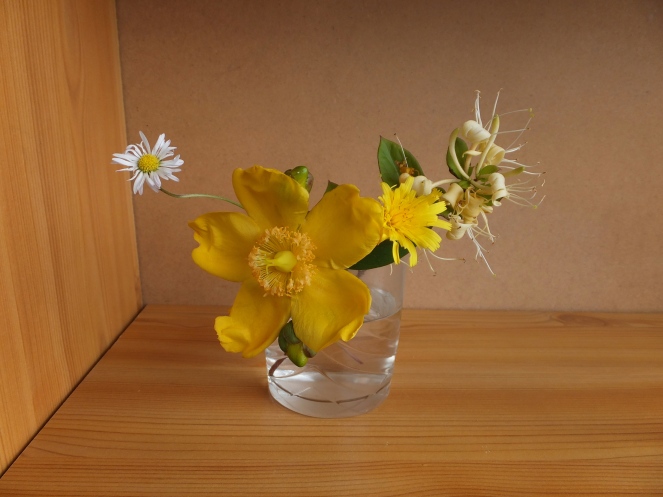 The gigantic yellow flower grew on a hedge by the roadside so there’s a possibility it wasn’t exactly “wild” haha but it was wildly beautiful so we had to pluck it. The smaller flower on the right is a dandelion that is very very wild and grows far and wide in literally every nook and cranny. You know why? Because of their frigging pollen. It was like snowing here when they started to “shed”. Seeing the pollen, my Japanese friends actually thought it was the season for the pigeons to shed and change their feathers and got totally freaked out lol. The last flower on the right is the very fragrant “Chevrefeuille” or the Honeysuckle. I would never have known this without E lol.

⑤ Red Flowers from the Hedges at the Corner

Yeah, the extent of E’s knowledge had to reach somewhere, and it stopped at no.④. Here are some red flowers we plucked from the hedge at the roadside corner lol (it was in full bloom, nobody would miss one or two missing!)

Such unnatural colors, yet completely natural.

And here’s my final “cup” of flowers that survived the photoshoot! ↓ 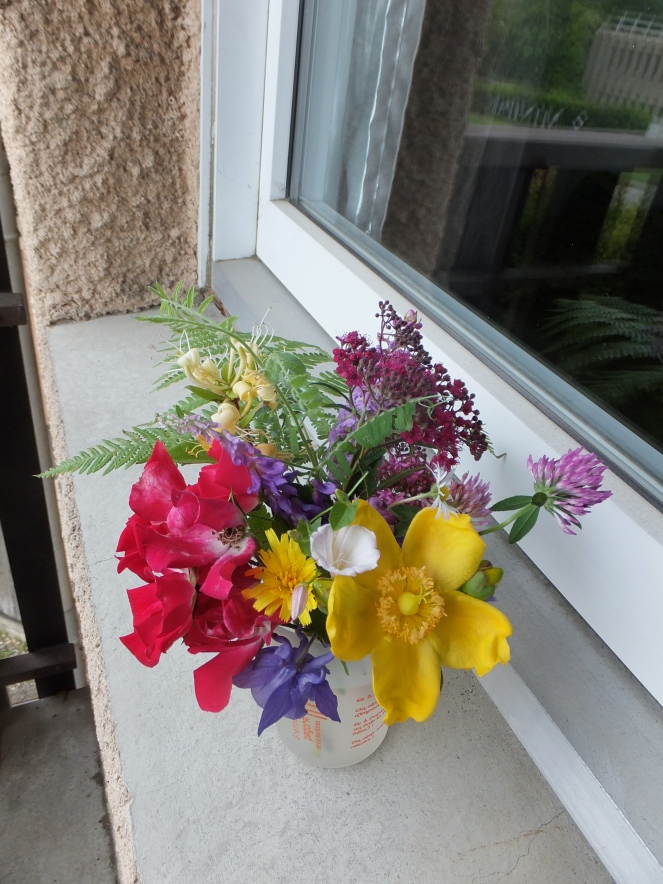 Oh and to join the pretty party, another “jar” of flowers I collected back in early March↓

One thought on “#21 Wild Flowers of Springtime France”